Biden: “For God’s Sake, This Man Cannot Remain in Power.” 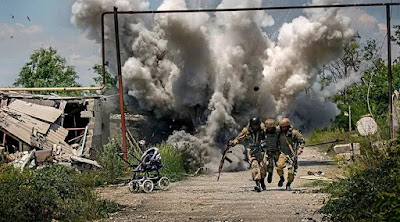 BIDEN, WALL STREET AND THE WAR IN UKRAINE - “DASH FOR CASH”

U.S. Secretary of State Blinken, French President Macron and many other U.S. and European officials scrambled to walk back Joe Biden’s March 27th Russian regime-change statements from a speech he gave in Warsaw, Poland. But that these words echo George W. Bush’s false accusations of weapons of mass destruction and participation in the 9/11 attacks by the Saddam Hussein government as a pretext for war against Iraq cannot be glossed over or ignored.

With President Zelensky saying that Ukraine will not join NATO and with Russia appearing to modify the aims of their “special operations” to defend the beleaguered Russian-speaking republics in the Donbas region and the Crimea and with negotiations continuing, Biden’s incendiary speech was clearly designed to torpedo any settlement.

And, as it turns out, this same imperialist war drive continues to motivate politicians from both political parties, the corporate media, the mad generals from the Pentagon, the oil and natural gas barons, the weapons dealers, and the financial wizards of Wall Street to join together to ensure that the conflict in Ukraine intensify, that Russians and Ukrainians continue to “shed their blood for our profits”. The European natural gas and oil market is just too tempting a prize for the billionaires to pass up.

No doubt most of the 80 million people that voted for Biden in November 2020, believed his pledge to fight for stopping the fossil-fuel industry’s induced climate change. But instead, these corporations have found a new friend in the White House.  A March 4th Guardian article describes Big Oil’s stance toward the Ukraine-Russia conflict this way:

But the fossil-fuel industry had a different take. They saw an opportunity – and a shameless one at that – to turn violence and bloodshed into an oil and gas propaganda-generating scheme. Within hours, industry-led talking points were oozing into press releases, social media and opinion pieces, telling us the key to ending this crisis is to immediately hand US public lands and waters over to fossil-fuel companies and quickly loosen the regulatory strings.

Despite industry’s claims to the contrary, President Biden has not hobbled US oil and gas development. In fact, this administration actually approved more US drilling permits per month in 2021 than President Trump did during each of the first three years of his presidency. Before the pandemic, oil and gas production from public lands and waters reached an all-time high, and the current administration has done little to change that trajectory over the last 13 months.

The arms dealers are eager to cash in on the Ukraine conflict as well, indicated by this March 28th Politico report:

War means windfall. Defense companies, both large and small, are scrambling to grab their share of ballooning budgets in the U.S. and abroad sparked by Russia’s invasion of Ukraine.

That dash for cash is expected to create tension between more established defense firms and younger upstarts as the Pentagon and allies figure out how to divvy up funding for Ukraine.

On Monday, the Biden administration releases its fiscal 2023 budget request to Congress, and is expected to ask for $773 billion for the Pentagon — $30 billion more than this year’s level. That’s on top of the nearly $14 billion supplemental in emergency aid for Ukraine passed this month.

The Price of the Billionaires’ “Freedom” to Exploit

But it’s just not blood they want nor huge weapons sales. Nor is it just the European oil and gas market that is the target of these vultures. Through capitalist-induced inflation, the billionaire class is once again calling on the workers and oppressed here and abroad to “tighten our belts” in the face of skyrocketing inflation, including much higher gas prices. This is a typical comment on March 15th from the online journal, “The Hill”:

Bottom line. Yes, today’s high price of gas is tough on American consumers. But it’s only temporary. Analysts predict gas prices will fall to an average $3.30 by December. Meanwhile, it’s the least we can do to help Ukraine against Russian President Vladimir Putin. You don’t have to like how much more you’re paying at the pump but stop complaining about it. Think of it as the price for freedom.

The Biden regime thought with the political elite of both political parties behind him, with the barrage of stories from the corporate media demonizing Russia and lauding the “brave” Zelensky regime and the NAZI-embedded Ukrainian military, that all of that would shore up his sinking popularity. But instead, as the New York Post reported in a March 27 article:

President Biden’s job-approval rating has plummeted to the lowest of his White House tenure — and seven in 10 Americans lack confidence in the commander-in-chief’s ability to handle the Russian invasion of Ukraine, a survey released Sunday found. ​

The number of Americans who approve of Biden’s actions since he took the helm of the country in January 2021 has fallen to 40% – the lowest of his presidency and a dramatic 13 percentage-point drop from April 2021, the NBC News poll shows.

It is impossible to predict the outcome of the conflict in Ukraine. Negotiations are set to begin in Istanbul, Turkey soon. What is clear, however, is that U.S. imperialism is desperately intent on continuing this conflict as long as possible, to bleed both Ukraine and Russia, to ensure  that both countries become subservient to the Wall Street master class.

But a strong response by the anti-war forces in the streets can foil their plans.

Stop the sanctions and proxy wars!

Posted by Michigan Emergency Committee Against War & Injustice at 1:48 PM