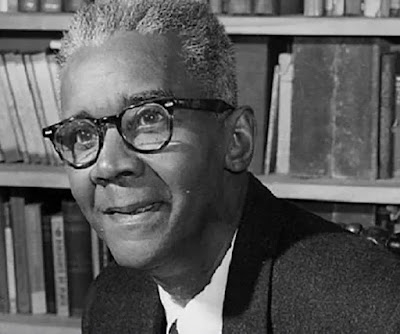 Transcribed & marked up by Einde O’Callaghan for MIA.

“I advise you that you may expect instructions and the call to march on Washington perhaps next spring.”

Who is this speaking? No less a person than A. Philip Randolph. This was his final message to the Negro people of Denver, where he spoke on Sunday and Monday, November 21 and 22. Randolph is once more “preparing” a march on Washington which he has already called off several times.

Randolph in his talks declared that fascism and discrimination are on the increase in the United Stages. Let us leave out fascism for the moment and deal with discrimination. Randolph is propagating a dangerous falsehood when he gives the impression that discrimination against Negroes is increasing in the United States. It is a dangerous falsehood because it is one-sided. While it is true that the reactionaries. North and South, have become more militant in their anti-Negro activity, the organized labor movement, the CIO in particular, is carrying on propaganda and agitation and taking steps, to build better relations between whites and Negroes on a scale never before known in this country.

This is the fundamental fact about racial relations today. During the recent upheavals in Detroit, the white and Negro workers in the factories displayed a solidarity which has been commented on by all observers.

Furthermore, many middle class and liberal minded people feel that, in a country which is supposed to be fighting for democracy, the situation of the Negroes is intolerable and something should be done about it. These people are, as usual, muddle-headed and do not see that only the labor movement can seriously tackle discrimination. But they mean well toward the Negroes.

However, when such a movement starts, the reactionaries are immediately on the alert to fight it. That is why the hoodlums and the Ku Klux Klanners in Detroit and backward labor elements in the South begin to be more vicious than ever in their attacks upon the Negroes!

They see that the Negroes are militantly on the offensive for their democratic rights. They see that large sections of the labor movement are taking the Negro’s struggles seriously. They see that in Detroit, the entry of thousands of Negroes and the chaos and confusion of capitalist society have brought about a sharp racial situation. But they see too that organized labor, in this case the UAW, fights for more than Negro rights in the ordinary social life of the city. Still more, the UAW and the Negroes actually formed a political united front in the recent elections.

It is all this which moves the professional Negro-baiters and the enemies of organized labor and the Negroes – they are often the same people – to raise their voices and plan and organize against Negroes. In so complicated a matter you cannot give figures but, in our opinion, the truth is not what Randolph says it is. It is because the movement toward recognition of the Negro’s rights is gaining strength that the enemies of equality are so active.

Randolph, Walter White, Adam Powell and the rest of them never make this clear. Whenever they face Negro militancy, they give the impression that the Negroes are in a minority and that everybody is against them.

However, in this crisis the fact is that Negroes are those who, by their militant struggles, have forced the country to take notice of them and their demands. And one of the enemies of Negro militancy is this same Philip Randolph. It is very important for us to get this right and not be fooled by Randolph again as we have been fooled in the past. Particularly when he begins to talk big about marching on Washington, “perhaps in the spring,” we have to watch him and warn everybody against him.

Randolph, Past and Present

Randolph has a good past. Many years ago, he was a socialist and ran a fine socialist paper for Negroes, called The Messenger. Then he became an organizer and leader of the Pullman porters. That, too, was a good job. Every time the AFL convention meets, Randolph makes a militant speech against discrimination in the AFL and gets a great deal of publicity.

But, as we have repeatedly shown in Labor Action, it was Randolph and Walter White of the NAACP who called off the march on Washington in 1941.

The Negroes wanted to march. Randolph and White had the opportunity to develop and lead one of the biggest Negro demonstrations that this country has known for years. It would have stimulated the organized labor movement and all progressive elements; it would have assisted the struggle for democratic fights all around, not only for Negroes, and it would have echoed around the world. But Philip Randolph said “No” and accepted instead the FEPC.

Today the Negro question is once more coming to the fore. The Attorney General’s office, the War Manpower Commission and others are all busy trying to pacify the wrath of the Negro people. The FEPC is exposed as a do-nothing body. It is at this moment that Randolph comes out again. He promises to lead a march, “perhaps in the spring.”

We say confidently: If, even by some miracle, he does find himself entangled in the leadership of such a march, he will betray it. We must beware of Randolph. He is pro-war, pro-Roosevelt, and he talks big, but is afraid of the militant mass movement. When he begins to promise a march in the spring it is time for us to do some organizing of our own and to remember Randolph’s betrayal two years ago.

Posted by Michigan Emergency Committee Against War & Injustice at 4:08 PM