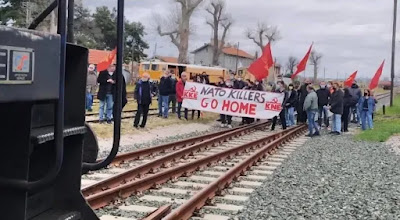 Long time labor organizers and activists are detecting new signs of life in organized labor in the U.S. Starbucks and Amazon workers are leading a remarkable rank and file led upsurge that is reaching national consciousness due to widespread coverage in the mainstream bourgeois media. Whether these new victories will portend a deep and lasting change in the working class in the U.S. with attendant international effects, only time will tell.

What started at a Buffalo, New York Starbucks last winter is a movement whose time, it seems, has now come. Since those workers won the first union victory last December, something of a prairie fire has resulted.  Four Starbucks stores are petitioning the National Labor Relations Board (NLRB) for elections every day in recent months across the U.S.  18 out of19 stores that have held elections resulted in victories – many lopsided. As of April 11, 2022  two cafes in Boston celebrated a combined 27-0 win.  Young rank and file organizers, when they hear of interest in a store within driving distance, are visiting the location and providing organizing “startup” kits with T-shirts, authorization cards and buttons.

These are not the fabled “flying squadrons” of striking textile workers in 1934 who drove from mill to mill from Maine to the Carolinas calling out workers to come out of the factories and join the strike of eventually 375,000. But the excitement in these young workers cannot be denied. They will be joining other Starbucks workers in other countries. One third of Chilean Starbucks cafes are already organized, one store in Canada and 450 workers in New Zealand have also unionized (Wikipedia).

The vast wealth accumulated by Starbucks originates in the exploitation of very young child workers in Guatemala, Brazil and Ethiopia who work for pennies picking coffee beans on contract farms, coffee that, once ground, ends up as a designer brand on Starbucks shelves in wealthy countries. According to the Brazilian Government, some Brazilian children work in “conditions analogous” to slavery. (Infact.com, the Guardian and Mongabay.com).  The capitalist supply chain of exploitation begins here and then moves to the sale force in the U.S. and Europe where additional surplus value can be wrung out of the labor of older workers.

The recent Amazon union victory of 5000 workers in Staten Island, NY- a first in the U.S. – led by African American organizer Chris Smalls has received unprecedented media coverage of an entirely positive character. The recently elected international president of the Teamsters Union, Sean O’Brien, has just met with Smalls promising unlimited support in the upcoming contract campaign. O’Brien campaigned for Teamster president on a promise to organize Amazon.

In Bessemer Alabama, the recent second election concluded recently in a near tie with 416 “challenged” ballots being examined by the NLRB. The Retail, Wholesale and Department Store Union (RWDSU)  lost the first election by a margin of 2-1. But the Board found so many violations of law by Amazon that it ordered a new election. Like Starbucks, Amazon has a huge international workforce of 500,000 as well as the 1.1 million in the U.S. Last year Amazon workers in France, Italy, Spain & Poland went out on strike on the same day (The Insider; Forbes.com). This past week 6 Amazon facilities in France went on strike on April 7th as workers staged a wildcat spontaneous walkout demanding higher wages.   Amazon Workers International is a European cross-border coalition of workers in those countries.

What can account for this new organizing? The young and low-income workforce in the U.S. (over 300,000 baristas and over a million Amazon workers) are struggling economically due to the current rampant inflation and the capitalist-induced rental housing shortage. For one thing the current low unemployment rate masks the fact that in the new world of part time employment, workers must take on two, three or more jobs to make ends meet. The federal government counts workers as employed if they work just one hour a week. Worse, real wages (adjusted for inflation) are falling fast and workers of all ages in warehousing, retail and hospitality industries are struggling to pay the rent and put food on the table. In the first year of the Great Depression, 1930, the old American Federation of Labor and the Railroad Brotherhoods could unionize barely 10% of the workers due to their craft-oriented and racial exclusionary practices.

Today the unionization rate in the private sector is below 10%. (Bureau of Labor Statistics 3/22 and National Bureau of Economic Research, 1937) Except for the Starbucks union, Workers United, a Service Employees International Union (SEIU) affiliate, established unions will not devote organizing capacity to small shops (50 and under). On the other hand, some employers like UBER and Amazon are so vast that only a really big union like the Teamsters have the capacity to organize them.

Oppressed workers have taken it upon themselves to self-organize in a thoroughly rank and file led manner. They are not waiting for an AFL-CIO organizer to knock on their door. Further, a large-scale solidarity movement is growing in parallel to this organizing. At a time when the ruling class in the U.S. and its warmongering media are driving the world to an inflationary global crisis, many workers are fighting back and choosing to engage in class struggle rather than drinking the poison of capitalist war. They deserve all the help we can give them.

Posted by Michigan Emergency Committee Against War & Injustice at 3:45 PM