Ukraine’s Zelensky Comes Before His Master 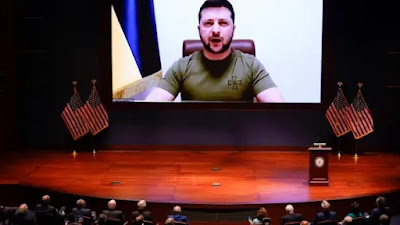 On March 16 Ukraine’s president Volodymyr Zelensky addressed the United States Congress. In a virtual speech Zelensky begged his imperialist masters for more military aid. He pressed for the U.S. and its North Atlantic Treaty Organization (NATO) military alliance to declare and enforce a “no-fly zone” over Ukraine and asked for military fighter aircraft. (CNN.com March 16, 2022).

What Zelensky didn’t say, but should have said, is that “you guys got me into this mess. I did everything you wanted. What do I do now with this Russian intervention?” From 2014 to 2022 the United States government maneuvered to bring Ukraine, a nation of over 44 million people, into its economic and military orbit. The February 2014, coup engineered by the CIA and State Department, overthrew the pro-Russian elected president Viktor Yanukovych. The military aim was to get Ukraine into the U.S. dominated NATO alliance and to bring U.S. troops and missiles right to the border of the Russian Federation. The Russians finally responded to stop this on February 24 with a “special military operation.”

Following Zelensky’s performance, U.S. president Joseph Biden announced another $800 million in weapons for Ukraine, saying the United States “is leading this effort … providing enormous levels of security and humanitarian assistance … and we’re going to continue to do more in the days and weeks ahead.” (CNN.com March 16, 2022),

This additional pledge to Ukraine is in addition to the $13.6 billion “to supply defensive, humanitarian and economic aid” including anti-aircraft and anti-armor systems, small arms and ammunition previously approved by Congress. (CNN.com March 9, 2022).

It should be noted that “humanitarian aid” is often a public relations cover for military supplies. A recent on-line posting reported “One of Italy’s largest trade unions has called for a protest outside the Pisa airport on Saturday, after receiving a tip from some employees that Ukraine relief flights were transporting weapons and ammunition, not food and medicine.

“Several workers at the Galileo Galilei airport refused to load one of the cargo flights advertised as carrying humanitarian aid to Ukraine. The crates did not contain food and medication but weapons, ammunition and explosives instead, the Unione Sindacale di Base (USB) said in a statement on Monday evening.

“We strongly denounce this outright falsification, which cynically uses ‘humanitarian’ aid as cover to fuel the war in Ukraine,’ the USB said. “(workers in Italy claim “humanitarian” cargo )

The U.S. government is quite pleased to continue arming its Ukrainian proxies and letting them do the dying. At the same time the U.S. is wary of putting its own troops in harm’s way. Reluctance by Biden and the Pentagon to declare a “no-fly zone” stems from fear of directly engaging with the Russian Federation military. Enforcing a “no-fly zone” would require numerous flights by NATO fighter planes facing off with Russian planes and pilots. This could easily spill over into neighboring NATO military bases, or worse.

Zelensky’s appearance before Congress indicates that reports of talks between Russia and Ukraine are unlikely to produce tangible results. Zelensky and the Ukraine ruling class are banking on NATO and the U.S. to keep them afloat against Russia. And the Russians are unlikely to back down now that they have committed fully to keeping Ukraine from joining NATO.

The people inside the United States, meanwhile, are virtual prisoners of an orchestrated propaganda campaign to build support for proxy U.S. military attacks (through Ukraine) and direct economic warfare against Russia by sanctions.

The main media news outlets hammer day and night the “official story” which ignores the U.S. role in pushing NATO closer and closer to Russia’s borders. The only voices given air time support Biden’s foreign policy objectives. Almost no alternative view is presented.

Unfortunately some of the progressive and anti-war movements are allowing themselves to be herded along by this truly massive united ruling class drumbeat. They should reflect upon the coverage of the civilian victims of the U.S. proxy war in the Ukraine getting endless photo ops and interviews to build opposition to the Russian intervention. When have we ever seen the pictures of the victims of the Ukrainian rightists who bombed and shelled the Russian speaking Ukrainian population in the eastern Donbas region? Those victims of war have been non-entities in the U.S. and other western media since 2014, despite over 14,000 deaths.

The U.S. sponsored and financed war against Yemen with relentless bombing by Saudi Arabia has continued unabated since 2014. Where are the pictures and interviews of the children, women and men who have died over the past eight years? Where is the news coverage of hospitals and schools destroyed? Where’s the coverage of the 81 people just executed in Saudi Arabia?

The list of victims of U.S. imperialist wars goes on and on. Honest people must ask themselves – “aren’t we having our opinions and actions molded by the imperialist war machine that includes the capitalist media?”

Posted by Michigan Emergency Committee Against War & Injustice at 6:52 PM