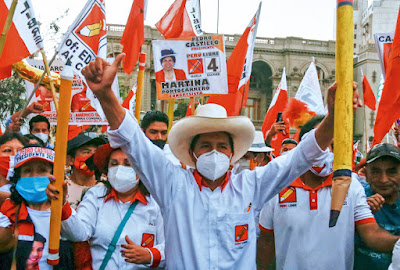 Foreign Minister was forced to resign after a campaign was launched for his removal due to comments made prior to taking office.

Daily efforts are continuing aimed at the overthrow of the recently elected administration of President Pedro Castillo of Peru.

Castillo, a member of the Free Peru Party, a socialist organization which grew out of the popular struggles of workers and farmers largely based in the rural areas of this South American state, won the national presidential elections during July.

The president is a former elementary school teacher, union leader and is a new participant in electoral politics in the often-volatile social atmosphere prevailing in Peru for several decades. Over the last five years, Peru has had the same number of presidents who departed due to impeachments and resignations.

A cabinet composed of progressives and socialists has to be approved by the legislative Congress of the Republic which is dominated by right-wing elements. There have already been demonstrations in the capital of Lima demanding the ouster of Castillo and his administration. The national currency, the Sol, has lost value as a direct result of the right-wing opposition allied with international finance capital committed to maintaining Peru and other South American and regional states under the domination of Washington and Wall Street.

On August 17, Foreign Minister Hector Bajar, 85, turned in his resignation after the conservative press backed by the western corporate media launched a campaign citing comments he made during a lecture given long before the election of Castillo and the taking of office by Free Peru. Bajar, a longtime activist and socialist theoretician, joined the revolutionary movement in Peru during the 1960s.

Bajar was a leading member of the National Liberation Army (ELN) which waged a political and armed struggle against the neo-colonial regime of the period. He was arrested and spent five years in prison stemming from his guerilla activities.

In 1968, after a military seizure of power by General Juan Velasco Alvarado, Bajar was granted amnesty and asked to join the regime of what was called the Revolutionary Government of the Armed Forces. The coup in 1968 was motivated by the repressive and corrupt policies of President Fernando Belaunde. After being deployed to the rural areas where the poverty and deprivation of the peasants and farmers were revealed to members of the military, they pressured the leadership of the armed forces to seize power. Many believe that this coup was carried out in an effort to preempt a people’s revolution in the country. Although many ELN members were killed, arrested and forced into exile during the early to mid-1960s, the objective conditions remained ripe for widespread unrest.

Bajar was assigned to work on land reform in Peru after being released from detention. The Revolutionary Government of the Armed Forces held power until 1975. Bajar would work in subsequent years as a writer, professor and community organizer.

In a videotaped lecture before a left-wing audience dated during 2020, which aired on Peru’s Panorama television program on August 15, Bajar asserted that: “I’m convinced, although I can’t prove it, that the Shining Path was in large part created by the CIA and (other) intelligence services.” Shining Path was a guerilla movement in Peru during the 1980s and early 1990s. A counter-insurgency campaign against the rebels by the military led to the deaths of 70,000 people. Bajar linked the supposed Central Intelligence Agency (CIA) operation to the Peruvian Navy, which immediately responded demanding his resignation.

An article published by Reuters press agency said of the political crisis in Peru: “The foreign minister’s departure is likely to add more political uncertainty to an administration already navigating a highly volatile and polarized first few weeks that saw the country’s sol currency fall to record lows against the dollar. Castillo, a member of a Marxist-Leninist party, has come under fire for naming a Cabinet that critics say is filled with fringe and inexperienced ministers. His backers say the Cabinet represents Peru’s marginalized masses.” (https://www.reuters.com/world/americas/perus-foreign-minister-resigns-setback-new-leader-castillo-2021-08-17/)

Such assessments are rife within the western-based corporate media. Although Bajar was pressured to resign for criticizing the Shining Path and the Navy, other reports have sought to link Prime Minister Guido Bellido to the same self-proclaimed Maoist grouping which operated under the banner of the Communist Party of Peru—Sandero Luminoso. An article published by the Wall Street Journal recently made claims that Sandero Luminoso had carried out killings recently inside of Peru leaving pamphlets at the scene calling for a boycott of the elections which brought Free Peru to power. (https://www.wsj.com/articles/peru-cuba-authoritarian-pedro-castillo-democracy-impeachment-maoist-11628446665)

Regional Dimensions of the Political Struggle in Peru

These attacks on the government of President Castillo are following a similar pattern utilized repeatedly throughout Latin America. In the Caribbean, the Republic of Cuba has been under a United States blockade for more than six decades.

An attempt to destabilize the Communist Party of Cuba (PCC) government on July 11 through the instigation of counter-revolutionary demonstrations and violence against the people failed to gain any traction among the masses. Thousands of PCC cadres and members of mass units of the Revolution came out into the streets in defense of the government of President Miguel Diaz-Canel Bermudez.

Corporate and governmental media outlets in the U.S. immediately began to publish articles accusing the Cuban government of ruthlessly suppressing the demonstrations which the White House said were legitimate representations of the people. The administration of President Joe Biden, which has not rolled back additional sanctions imposed on Cuba by its predecessor, Donald Trump, and instead implemented new punitive measures against the military apparatus of the country.

In Venezuela, the Bolivarian Republic government led by President Nicolas Maduro, has been the target of numerous coup attempts engineered by the CIA and the State Department. The Trump administration recognized Juan Guido, a largely unknown political figure, as the “legitimate” head-of-state in Venezuela. The Biden administration has not lifted any of the sanctions against Caracas and still recognizes Guido as the person they are promoting to displace the revolutionary government.

Bolivia has voted back into office the Movement for Socialism which was overthrown by the military in 2019. Since taking office, Bolivian President Luis Arce has withdrawn from the so-called Lima Group established at the aegis of imperialism aimed at the illegal overthrow of the Bolivarian Republic of Venezuela.

There was much speculation that former Foreign Minister Hector Bejar would totally disassociate Peru from the counter-revolutionary Lima Grouping. President Castillo must appoint another foreign minister while awaiting the approval of the Congress of the Republic where Free Peru and its allies do not have a majority.

Peru is a deeply exploited and impoverished state in South America which historically has produced tremendous wealth for the world capitalist system. The country is well-endowed with mineral resources which include gold, copper, silver, lead, zinc as well as petroleum.

The struggle for genuine democracy and socialism has been waged for many decades. The Marxist theorist and co-founder of the Socialist and Communist Parties during the 1920s, Jose Carlos Mariategui La Chira, wrote extensively on the Peruvian situation within the context of the global crisis of capitalism and imperialism.

In a series of lectures entitled “History of the World Crisis” Mariategui outlines what he perceived as the central issues facing the working class in Peru. The first lecture was called “The World Crisis and the Peruvian Proletariat” delivered to the Peruvian Student Federation on June 15, 1923, Mariategui emphasizes: “In this great contemporary crisis, the proletariat is not a spectator; it is an actor. In it the fate of the world proletariat is to be resolved. From it will emerge — according to all odds and predictions — the proletarian civilization, the socialist civilization, destined to succeed the declining, decadent, moribund capitalist, individualist, and bourgeois civilization. The proletariat needs, now more than ever, to know what happens in the world. It cannot know it by way of the fragmented, occasional, homeopathic reports of the daily cable — badly translated, and worse written, in most instances — coming always from reactionary agencies charged with discrediting the Revolution’s parties, organizations, and men (people), and of discouraging and disorienting the world proletariat…. We are witnessing the disintegration, the agony of a worn-out, senile, decrepit society, and, at the same time, we are witnessing the slow and restless gestation, the formation, the creation, of the new society. All men (humanity), for whom a sincere ideological filiation binds to the new society and separates us from the old, must profoundly fix our gaze on this, agitated and intense, transcendental period in human history.” (https://www.marxists.org/archive/mariateg/works/1924-hwc/hwc01.htm)

Today throughout South America, Central America and the Caribbean this struggle against imperialism and for socialist transformation continues. Anti-imperialists throughout the region and in North America have a role to play in fostering solidarity with the oppressed and struggling peoples of the world.

Posted by Michigan Emergency Committee Against War & Injustice at 4:13 PM