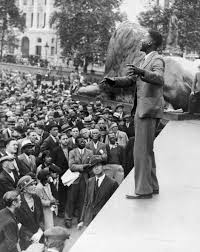 Two events have taken place during the last few days which light up the home situation for the Negroes. The first is the Russo-German war; the second is the calling off by Randolph of the march on Washington.

The first seems far away. In reality it is close to the American Negro – very close. The Communist Party, with all its funds, its organizers, its press, has already changed its policy of calling the war an imperialist war, for a policy of helping the “democracies.” Up to last week they were attacking Roosevelt, stimulating the workers to action, calling upon Negroes to fight for their rights here, telling workers everywhere not to be fooled by all the propaganda about war for democracy.

That was ten days ago. Then Hitler falls out with Stalin, they begin to fight and once more these Stalinists begin to push the American workers and the Negro people into the jaws of the American ruling class. Once more the Stalinists have shown that they are nothing else but servants of the rulers of Russia, using the workers and the oppressed in all countries in order to further Stalin’s foreign policy. Look at it.

Our Record Against Theirs

1933–1935. Stalin has no foreign alliance. The Stalinists tell the Negroes that Roosevelt is the enemy of democracy and the Negroes must fight against the American ruling class.

1935–1939. Stalin gets an alliance with France and tries for an alliance with Britain. The Stalinists tell the Negro people that they must support Roosevelt, that everybody everywhere must do all that is possible to help “the democracies” defeat Hitler, Mussolini and the Mikado.

1939–1941. Stalin joins Hitler. The Stalinists tell the Negro people that Roosevelt is the enemy, that the war is an imperialist war, that the struggle must be carried on here, that not Hitler but all capitalists are enemies.

June, 1941. Hitler fights with Stalin. The Stalinists start at once to tell the Negroes how they must bend all their energies to the defeat of Hitler.

But note please that from 1932 to 1941 the Negro is where he always was, stamped upon by all. Cotton Ed Smith, Senator Bilbo, the federal government, the army, the navy, the air force, the war industries – all oppress the Negro as much as they ever did. The Stalinists do not care. They are concerned with their paymasters in Moscow, not with Negro emancipation.

Compare them with the Workers Party. We have one policy. It is this: The oppressors of the American Negroes are here. They have always been here. Our fight is here. Hitler is not oppressing Negroes in Chicago, in San Francisco or in Birmingham. Negroes were oppressed before Hitler was born. They will be oppressed after he is dead – unless they overthrow their oppressors, the American ruling class.

The Stalinists are among the greatest enemies of the Negro people for they deceive and use them in the interests of the masters of Russia.

The March Is Called Off

The second point is that Roosevelt got so scared at the idea of 100,000 Negroes marching on Washington that he and Eleanor Roosevelt, Stimson and Knox, all moved heaven and earth to stop the march. From the time the agitation for the march got under way, the Workers Party has insisted upon its tremendous significance. The American ruling class also saw how important it was and so they used Randolph to sabotage the independent action of the Negro masses. Now Randolph, Crosswaithe, Walter White and the rest in this latest action of theirs are stooges for the American ruling class. Ford and the Stalinists are stooges for the Stalinist bureaucracy. These two groups were enemies yesterday, but today the Stalinist bureaucracy and the American ruling class are on the same side. Look out for the stooges. They will all be pushing hard to get the Negroes to support of the war, to support Roosevelt, etc. They will get closer and closer.

During the next few weeks we shall expose the tricks and dodges and treachery of the enemies of the great masses of Negroes. Follow Labor Action carefully. Read its general articles as well as the articles on Negro struggles. The Negroes must keep their heads clear or their fight will be betrayed by stooges inside the Negro ranks. Negroes, be on guard!

Posted by Michigan Emergency Committee Against War & Injustice at 1:23 PM