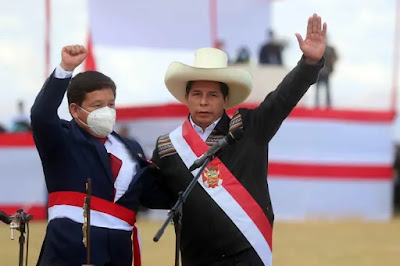 Right-wing political interests within the Peruvian parliament backed by international finance capital have sought to besiege the newly elected socialist president of the South American state of Peru.

There was a tremendous struggle to win the right of the new president to take office since several challenges to the vote resulted in a delay in his inauguration.

The Free Peru Party which Castillo represents, along with its allies, holds approximately 50 seats within the national parliament. Their margin within the legislative body makes them a minority out of 130 members.

This party was founded by Vladimir Cerron, a regional politician who held office as governor of Junin.  Cerron remains Secretary General of the Free Peru Party while battling a criminal investigation which led to his conviction and incarceration.

Impeachment by the parliament is not a rare occurrence within Peruvian politics. Former President Martin Vizcarra was thrown out of office in 2020 as were many others elected since 1985.

Only 87 votes would be needed to remove the existing president from his position. The opposition forces are mobilizing their supporters both within and without government in order to maintain the status-quo.

Castillo was sworn into office on July 28 and only several days later, two thousand right-wing protesters held a demonstration in the capital of Lima demanding that the parliament impeach the president. Many statements have been made by supporters of the presidential candidate which Castillo defeated, Keiko Fujimori, a member of the political dynasty that has held influence in the country since the 1980s when the country faced widespread violence in the rural areas in efforts by the state to contain two liberation movements, the Shining Path and the Tupac Amaru Revolutionary Movement.

Peru’s electorate which voted in the current president has been afflicted by widespread corruption and the interference into its internal affairs by multinational mining corporations whose profit-making ventures have left the majority of the people impoverished. Western media outlets and their surrogates in Latin America have published articles since the inauguration of President Castillo claiming that the government is dominated by “far leftists” who would discourage investment by capitalist companies.

Castillo appointed Guido Bellido as Prime Minister who is charged with forming a new government by appointing a cabinet. The anticipation of many is that the right-wing dominated legislature will not approve the executive team assembled by Free Peru. In the event of such a disapproval the cabinet could be dismissed opening up a debate over the future of the constitutional order within the country.

Bellido is another target of the corporate media and the right-wing forces in Peru. He has been accused of being a “far leftist” committed to the radical reconstruction of the national economy of Peru. Both Castillo and Bellido are in solidarity with the revolutionary governments of Cuba and Venezuela.

An indication of the hostility towards the Castillo presidency is illustrated by the Christian Science Monitor which wrote on August 6 that:

“A far-right party has demanded another five ministers be removed from the Cabinet for alleged terrorism sympathies. One is Héctor Béjar, Mr. Castillo’s foreign minister, who trained in Cuba in the 1960s and was part of a small band of guerrillas that tried to spark revolution in Peru. The other eight opposition parties in Congress have all demanded changes as well. Of the 19 ministers, 12 have raised objections from one or more party. The Castillo government ‘has chosen ideology over pragmatism,’ says Gonzalo Banda, a political science professor at the Catholic University of Santa María.”

The solidarity expressed by Free Peru with the left governments and revolutionary movements in the region is mischaracterized by the right-wing which asserts that they are supporting “dictatorships.” In addition, Castillo and Bellido are seeking to enhance ties with the People’s Republic of China (PRC) which already has joint agreements with the government in the copper mining industry.

On his first day in office, Castillo was inoculated with the Sinopharm vaccine developed by China in the efforts to guard against the further spread of COVID-19. Despite its statements of admiration for revolutionary movements and governments in Latin America, Peru still maintains ties with the United States through diplomatic channels and economic agreements.

Ideological and Political Origins of the Free Peru Party

Castillo was chosen by the Free Peru Party as its candidate in the recent elections. His background is in the education sector and trade unionism. The Party is heavily oriented towards the rural areas of Peru where it received the overwhelming votes of the peasants and farmers.

Free Peru says its ideology is based upon the teaching and activities of Karl Marx, the co-founder of the First International and the principal theoretician of scientific socialism and V.I. Lenin, the co-founder of the Bolshevik faction within the Russian Social Democratic Labor Party (RSDLP) and later the Russian Communist Party which took power in October 1917 establishing the first socialist state.

Another major influence is the Peruvian philosopher, journalist and organizer, Jose Carlos Mariategui La Chira (1894-1930). Mariategui was a major figure in the left movement in Peru and later traveled extensively in Europe. He was in Italy during the period leading up to the rise of Benito Mussolini and the fascist regime in 1922.

In Latin America, Mariategui was the founder of the Socialist Party in 1928 which later became the Communist Party of Peru in 1930. His major contribution philosophically was the book entitled “Seven Interpretive Essays on Peruvian Reality” published in 1928. This work is often credited as being the first historical materialist analysis of the social situation in South America. The author blamed the land-owning elites backed by imperialism as the source of political stagnation in the region.

Mariategui discusses the “Indian question” as a manifestation of the land problem in Peru. He advances the notion that socialist ideology should be based upon the concrete circumstances of the workers and farmers inside the country. Due to years-long health problems, Mariategui died in 1930 at the age of 35. Today Mariategui’s writings are still widely read throughout Latin America and his influence continues as illustrated by the contemporary debates within Peru and other states in South America.

Implications of the Destabilization Efforts Against Peru

Of course, the present circumstances facing Castillo in Peru is indicative of the imperialist policies within South America, Central America and the Caribbean. U.S. imperialism and its allies are seeking to overthrow all revolutionary governments in Latin America while thwarting those political parties, trade unions and popular alliances fighting to transform these states from neo-colonialism to socialist construction.

Although Castillo has made statements attempting to distance himself from the characterizations made by the corporate and imperialist-allied media, this has not halted the efforts to remove his administration from office. The foreign affairs ministry immediately announced Peru’s withdrawal from the so-called Lima Group, a U.S.-sponsored alliance of conservative forces aimed at the overthrow of the Bolivarian Republic of Venezuela and the installation of a right-wing regime compliant to the dictates of Washington and Wall Street.

Telesur reported on Peru in an August 6 dispatch noting:

“On Tuesday (Aug. 3), Peru’s Foreign Affairs Minister Hector Bejar announced that his country would withdraw from the Lima Group, which supported the Venezuelan opposition to overthrow the Bolivarian Revolution in 2019. ‘From a democratic foreign policy, we will contribute to the understanding of the various political tendencies that exist in Venezuela without intervening in its internal affairs,’ Bejar stated. Conservative politicians and former presidents from Peru, Mexico, Bolivia, and Argentina formed the Lima Group, an institution that operates as an instrument of U.S. geopolitics towards Latin America. In his inaugural address, Bejar also assured that he will work to strengthen cooperation and integration among Latin American countries without making ideological distinctions.”

An independent foreign policy which recognizes the sovereignty of Venezuela, Cuba and other countries in the region will undoubtedly fuel Washington’s opposition to the Free Peru government. Bolivian President Luis Arce of the Movement for Socialism Party has welcomed the withdrawal of Peru from the Lima Group. Bolivia underwent a U.S.-backed coup in 2019 overthrowing former President Evo Morales. Nonetheless, Arce won the latest election in 2020 returning the socialist government to power.

Even though the U.S. is now governed administratively by the Democratic Party under President Joe Biden, the foreign policy imperatives have not been altered. Hostilities towards Cuba, Venezuela, Bolivia, China, Iran, Zimbabwe and other anti-imperialist states remains a hallmark of the imperialist system irrespective of the two leading capitalist parties. A shift in Washington’s posture towards the socialist states and oppressed nations will require the building of an uncompromising antiwar and anti-imperialist movement within the confines of the U.S.

Posted by Michigan Emergency Committee Against War & Injustice at 4:05 PM