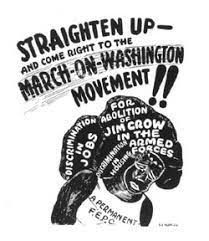 Brothers and sisters! We merely say we are going to march, we announce that we mean business, and lo and behold! Franklin Roosevelt writes a letter, actually writes a letter, about the Negro in war industries.

Isn’t it a grim comedy?

American capitalism voting billions to defend persecution of the Jews, getting heart disease over Stalin’s invasion of Finland. And the thought of Japan getting on the backs of the poor natives in the Dutch East Indies (after pushing off the Dutch) – at the mere thought of this crime Roosevelt has to send the fleet to the Pacific. How he l-u-v-e-s liberty! He loves liberty in foreign countries (and capitalist profits) so much that he is too busy to see the Negroes being kept out of war industries and discriminated against all the time.

But when the Negroes say that they are going to march on Washington, when they sell buttons, when they collect money – that is another story. It looks as if they mean business. Therefore Franklin Roosevelt now remembers that Negroes are being kept out of war industries. So he writes a letter to the Office of Production Management. He says that Jim-Crow must stop. He gives no fireside chat, he makes no speech in Congress, he sends no fleet, he sends no troops as he sent to California. He doesn’t do one thing except write a letter.

Now this is exactly what Roosevelt has been doing to Negroes for years. And a Negro who lets that fool him is a dope; in big letters: D-O-P-E.

One of His Moth-Eaten Tricks

Roosevelt is preparing to pull off one of his notorious tricks. First thing he hopes to do is to make Negroes feel that something is now, at last, going to be done so that they can take it easy about that dust ready to throw into the eyes of the marchers when they reach Washington, particularly in the eyes of the leaders. Either he or one of his stooges will stand up on his hind legs and relate how he has always been keenly aware of the discrimination against Negroes and has actually written a letter, etc.

We Can’t Wait for Roosevelt

Meanwhile we are not waiting either on you or on industry. Your letters, as far as we are concerned, are not worth the paper they are written on. We have had enough of this nonsense. We shall march, we shall make our demands; they must be granted as our rights, not as favors; and if there is any attempt to turn us off with soft words and phony letters written at the last minute, we shall picket and demonstrate and proclaim to all the world what a thundering piece of hypocrisy is your supposed war for democracy.

No, sir. No last minute repentance and soft words to get us out of Washington as soon and as gently as possible. We are going to be heard.

Next week we shall have a few words on those who are leading the march. We expect action from them. We don’t expect them to draw their swords and gallop down Constitution Avenue on foaming chargers. We don’t expect them to lead any revolution either (God help the revolution they will lead). But there are certain things that we shall demand from them. And while (for the moment) we cannot control the President, the marchers can control their own leaders if they want to. Franklin Roosevelt is up to his old tricks and we must be on guard.

Posted by Michigan Emergency Committee Against War & Injustice at 1:19 PM