Labor Board Official Calls for Union Revote at Bessemer 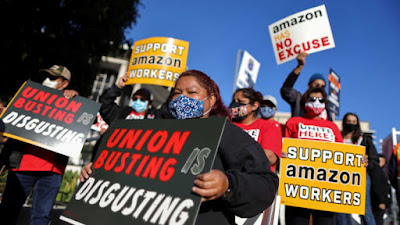 The Retail, Wholesale and Department Store Union (RWDSU), who challenged the union recognition vote at Amazon’s Bessemer, Alabama warehouse in April won a significant victory on August 2. A hearing officer from the National Labor Relations Board ruled that Amazon did indeed violate federal labor law to stop workers from voting for the union.

Workers endured an intensive anti-union campaign designed by Amazon to intimidate and interfere with their choice on whether or not to form a union. Today’s recommendation is based on Amazon’s illegal tactics and shows how the company was willing to use any and all tactics, illegal or otherwise, to stop workers from forming a union.

Amazon had  the Postal Service place an unauthorized special ballot mailbox in a tent in the warehouse, which the union and the NLRB official  said made the workers believe that Amazon monitored who went into the tent to vote. Amazon is infamous for its cameras watching its workers’ every move.

The NLRB official recommended that the full NLRB board overturn the election results and hold a second election.

Unionists and other activists had organized strong pro-union actions across the country to support the predominantly Black Bessemer workers. But the “space cowboy” Jeff Bezos-owned company pulled out all stops to scare the workers from voting for the union, as detailed in an April 29th article by David Sole in Fighting Words. In this era of voter suppression of the oppressed communities, Sole made this crucial point:

[U]nion drives under current capitalist labor law massively favor the bosses. Voter suppression is in the news now in relation to the attempt to keep millions of people from casting ballots in local, state and national elections. But suppression of workers in the workplace has been perfected over many decades to favor the interests of the exploiting capitalist class.

Of course, justice demands that there should not have to be a revote. Because of its gross violations of even the boss-friendly federal labor laws in this election, Amazon should be forced to recognize the RWDSU, go to the bargaining table with the union, and agree to a good contract with these workers.

The struggle at Bessemer has caught the eye of other unions. The million member Teamsters union passed a resolution at its June convention to organize a company-wide union drive at Amazon, to “supply all resources necessary” for such an effort. The Seattle Times reports:

[T]he Teamsters favor a combination of tactics like strikes, protests and boycotts that pressure the company to accede to workers’ demands, often with the help of workers at other companies, sympathetic consumers and even local businesses threatened by a giant like Amazon.

“Building our relationships within the community itself is the way to deal with that,” Randy Korgan, a Teamsters official from Southern California who is the union’s national director for Amazon, said in a recent interview.

In the face of this monopolistic, anti-worker, anti-union, anti-community giant that is Amazon, only struggle and solidarity can win a union victory. For Bessemer and all Amazon workers, the union recognition campaign merits the continued strong support of every unionist and every activist.

Posted by Michigan Emergency Committee Against War & Injustice at 3:19 PM