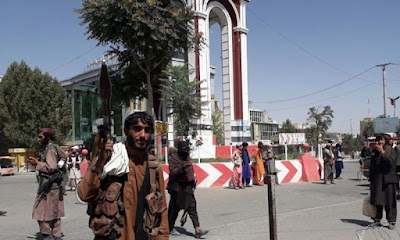 UNTOLD DEAD, AND MILLIONS DISLOCATED, WHILE THE PENTAGON AND STATE DEPARTMENT EVACUATE TENS OF THOUSANDS

After 20 years of destruction and countless billions of war spending, the U.S. has been driven out of Afghanistan. | Photo: Kim DeFranco/fightbacknews.org

We welcome the defeat of U.S. imperialism in the Central Asian state of Afghanistan in the aftermath of a two decades-long occupation.

This completely unnecessary war since 2001 was initiated under the false pretense of fighting “terrorism” as represented by the al-Qaeda grouping.

The hijacked passenger jet crashes into the World Trade Center in New York City and the Pentagon right outside of Washington, D.C. provided a rationale for former U.S. President George. W. Bush to launch a worldwide war against those deemed in opposition to the foreign policy of Washington. There was no evidence that the previous Taliban government was involved in the planning, financing or execution of the September 11, 2001 attacks where over 3,000 people were killed.

The following month, in October of 2001, Bush announced the massive bombing and ground invasion of Afghanistan. Osama bin Laden, the former leader of al-Qaeda was not found until nearly ten years later, not in Afghanistan, but in neighboring Pakistan.

The U.S. public and the world were told that the purpose of the war was to downgrade the capability or to destroy al-Qaeda. Another reason cited by both the Bush and Obama administrations was that the Pentagon wanted to either capture or kill Osama bin Laden.

Nonetheless, after Bin Laden was killed in a commando raid in May 2011, the Pentagon and allied NATO forces remained in Afghanistan for another ten years. Over the last twenty years, the focus of the war has shifted from al-Qaeda to the Taliban and the Haqanni Network. Yet the war continued, draining the national treasury of the U.S. and other NATO members.

Estimates suggest that at least $2 trillion was spent on the failed war by the working people of the U.S. The human costs of killed, wounded and traumatized soldiers and their families are incalculable. Tax monies used to maintain the occupation could have been easily utilized to rebuild the cities, suburbs, small towns and rural areas which have been devastated due to the recurrent economic recessions.

The infrastructural deterioration within the U.S. is a direct result of the Pentagon budget along with the unequal distribution of wealth. Weapons manufacturers, defense services corporations, financial institutions, mercenary entities such as Blackwater and its various iterations, all profited immensely from the Afghanistan occupation and other wars that have been carried out simultaneously by the White House and Wall Street.

Those who opposed the invasion and occupation of Afghanistan have long been vindicated for their principled political position. Today, once again, Washington has been exposed as the imperialist warmongers who have brought death and destruction to Central Asia coupled with the impoverishment and immiseration of the working and oppressed people in the U.S.

The Taliban spokespersons in Kabul have laid out their plans for a new inclusive government based in the capital. They have made statements related to their positions on women in society as well as the potential for bilateral relations with neighboring states and the international community.

Corporate media outlets in the U.S. are criticizing the administration of President Joe Biden for the rapid retreat and the subsequent chaos which has shocked people throughout the world. Tens of thousands are being airlifted out of Afghanistan including those holding U.S. passports and green cards coupled with those who assisted the Pentagon and State Department during their occupation.

Ultimately, it will be up to the people of Afghanistan to resolve their own internal problems related to governance, national development and foreign policy. Russia, China and Iran have pledged to work with the new Taliban government to prevent further destabilization and displacements which are impacting the regions of Central, South and Western Asia.

Afghanistan Illustrated the Imperialist Aims of the U.S. in the Region

Since the late 1970s, when Afghanistan had been governed by the People’s Democratic Party (PDPA), a socialist-oriented secular organization which had instituted reforms related to women’s rights, land reform and economic development, the U.S. has interfered in the internal affairs of the country. Washington, under the Democratic administration of President Jimmy Carter and his National Security Advisor, Zbigniew Brzezinski, began to fund the so-called “Mujahedeen” in their struggle to overturn the secular and anti-imperialist government.

The former Soviet Union deployed troops into Afghanistan in December 1979 in order to defend the socialist-oriented government. The PDPA invited the Soviets into the country as a fraternal party.

With the advent of the Republican administration of President Ronald Reagan, the anti-socialist forces were promoted by the U.S. as “freedom fighters” committed to building bourgeois democracy. Nonetheless, the U.S.-backed forces committed atrocities against the people while destroying many of the development projects initiated by the PDPA.

By 1989, the government of Mikhail Gorbachev in the Soviet Union was rapidly abandoning the commitments made to allied socialist and national liberation movements internationally. From Cuba to Eastern Europe and Africa, Soviet assistance was rapidly withdrawn. The socialist states in Eastern Europe had collapsed by the end of 1989. The Soviet Union followed this pattern and disbanded by the conclusion of 1991.

Soon enough the PDPA government collapsed under the weight of U.S. imperialist assistance to the opposition forces. For several years, the Taliban and other groups battled for control of the country. By 2001, the Taliban was in control of Kabul while the Northern Alliance was attempting to seize power.

The U.S. and NATO invasion in 2001 was declared a victory by imperialism. Less than two years later, Bush was invading Iraq under another fabrication related to the purported disarmament of the government of Saddam Hussein. There were no “weapons of mass destruction” which threatened the U.S. and its allies in the region. Thousands more U.S. and coalition troops were killed and wounded, not to mention a reported one million Iraqis.

Pentagon troops still remain in Iraq and neighboring Syria. The Iraq and Syrian governments did not invite the U.S. and its allies into their countries. Both Syria and Iraq have repeatedly demanded the withdrawal of uninvited foreign forces.

Imperialism to blame for all Afghan deaths and suffering

Biden laments that Afghan soldiers have refused to kill their fellow Afghans despite “our having paid them.” After the downfall of the Afghan puppet regime, the U.S. corporate media, from Fox News to CNN to MSNBC, have demonized the conservative religious Taliban as “anti-woman” and “bloodthirsty”. But all the Afghan casualties since the U.S. invasion and occupation starting in October, 2001, must be laid at the feet of Washington and its imperialist partners. This is from a 2010 article in the Guardian newspaper:

Twelve American soldiers face charges over a secret “kill team” that allegedly blew up and shot Afghan civilians at random and collected their fingers as trophies.

Heroic whistleblowers like Chelsea Manning and Julian Assange, who exposed numerous war crimes committed by Coalition forces in Afghanistan, have been harshly persecuted. Assange, founder of WikiLeaks, remains locked up in a British jail today awaiting extradition to the U.S. The Trump regime even sanctioned the International Criminal Court when it began investigating U.S. war crimes in Afghanistan.

An April, 2020 report from the Watson Institute at Brown University gives an updated picture of the terrible toll that Afghans have endured from the U,S. occupation:

The war in Afghanistan continues destroying lives, due to the direct consequences of violence and the war-induced breakdown of public health, security, and infrastructure. Civilians have been killed by crossfire, improvised explosive devices (IEDs), assassinations, bombings, and night raids into houses of suspected insurgents.he United States military in 2017 relaxed its rules of engagement for airstrikes in Afghanistan, which resulted in a massive increase in civilian casualties. From the last year of the Obama administration to the last full year of recorded data during the Trump administration, the number of civilians killed by U.S.-led airstrikes in Afghanistan increased by 330 percent.

The CIA has armed Afghan militia groups to fight Islamist militants and these militias are responsible for serious human rights abuses, including extrajudicial killings of civilians.

Even in the absence of fighting, unexploded ordnance from this war and landmines from previous wars continue to kill, injure, and maim civilians. Fields, roads, and school buildings are contaminated by ordnance, which often harms children as they go about chores like gathering wood.

The war has also inflicted invisible wounds. In 2009, the Afghan Ministry of Public Health reported that fully two-thirds of Afghans suffer from mental health problems.

About 241,000 people have been killed in the Afghanistan and Pakistan war zone since 2001. More than 71,000 of those killed have been civilians.

On August 26, at least 13 U.S. soldiers and 170 Afghans, including civilians and Taliban soldiers, were killed by a suicide bomber outside Kabul’s airport. You can be certain that none of those killed or wounded were weapons contractors or other war profiteers, who are the only ones who benefited to the tune of trillions of dollars from the Afghanistan War and occupation.

The current situation in Afghanistan should serve as a warning to Washington. Similar to the situations in Vietnam during 1975, Lebanon in 1983, Angola in 1987-88 and Somalia during 1993, the U.S. will probably be forced to withdraw from Syria and Iraq along with halting its support to the Israeli state in Palestine and the Saudi regime waging war against the people of Yemen.

Moreover, there are no justifiable imperialist interventions and occupations in the contemporary period. Antiwar, anti-imperialist, peace and social justice organizations must oppose all U.S. wars of conquest and regime change throughout the globe.

Posted by Michigan Emergency Committee Against War & Injustice at 4:22 PM