Dozens Rally to “Stop the Hate” in Rural Wisconsin 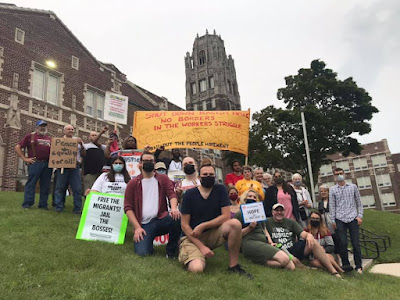 Manitowoc, WI, 8/10/21 — Dozens rallied at Lincoln High School, in response to a call by the Manitowoc Human Rights Coalition, before a scheduled Board of Education meeting. The rally was called “To defend the school system and library from the forces of intolerance, bigotry, racism, and hate that are undermining diversity and respect for all members of our community. Our schools and library are increasingly under attack from a well-funded and nationally organized campaign that opposes free thought, truth, diversity, and our unions”.

A banner held on the grass while people were picketing in front of the school read “Shut Down Racist Hate, No Borders in the Workers Struggle”. It was signed by Wisconsin Bail Out the People Movement. Diverse signs carried by the picketers included a rainbow flag with the word “Peace”, “Stop the War on Children from Gaza to the U.S./Mexico Border”, “Say It Loud, Say It Clear, Refugees Are Welcome Here”, “Stop Asian Hate Now”, and “Peace and Equality for All”.

After picketing for about an hour, the entire group marched inside to attend the Manitowoc School Board Meeting. Former Alderperson Aaron Bailey, who was also one of the rally organizers, told the School Board during public comment:

The chairperson of the Manitowoc Republican Party also spoke, pushing forward the national right-wing program against the teaching of Critical Race Theory in the public schools. CRT is an academic program taught in law schools about systemic racism. It is not taught in Manitowoc public schools.

In spring and summer 2021 in particular, the Center of the American Experiment worked closely with the Americans for Prosperity and other right-wing groups such as the Milwaukee-based Bradley Foundation to push Education Not Indoctrination attacks on local school boards, among other attacks.

The Education Not Indoctrination group attacking historical truth being taught within public education is a part of the right-wing State Policy Network, all of which is funded in part by the Bradley Foundation. Right wing forces are using CRT to push forward their agenda of attacking educators’ unions, pushing privatization and opposing historical truth being taught in public schools. The right is also using CRT and their anti-masking campaigns to recruit a base for school board elections.

Education Not Indoctrination is active in Manitowoc, Wisconsin and other locations. On August 8 a member of the group, John Cress from Manitowoc, sent what is viewed by many community members as a threatening email opposing the planned Stop The Hate Rally.

The Stop the Hate Rally was also supported by the Wisconsin Bail Out the People Movement, MLK Day Manitowoc, and the Peoples Power Summit.

Posted by Michigan Emergency Committee Against War & Injustice at 3:43 PM