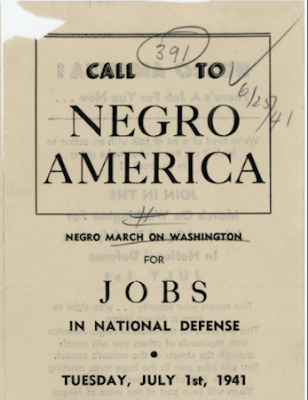 During the last war, Professor Kelly Miller wrote a famous letter to Woodrow Wilson in which he proved conclusively that America’s policy of war for democracy was in opposition to its treatment of Negroes. Wilson, it is reported, said that this was the most important internal document which had come out of the war. Wilson no doubt admired its literary style, its moral tone, and its uselessness. He himself was, of course, a master of just such futilities.

After the war there was Garvey with his “Back to Africa” movement. Came the depression in 1929 and the mass Negro movement into the CIO. Now, at a great world crisis, comes a deepening upheaval of the Negro people, culminating in this movement of the spearhead to Washington, the center of government.

Properly organized, this march will be an international event of the first importance. To every oppressed nationality in Europe, to a hundred million in Africa, to Indians and Chinese, such a march brings home precisely what the world situation is revolving around. Is man going to be more free or less free? Roosevelt would prefer to lose a battleship than have this question forced upon him now. The Negro masses are going to learn by hard experience exactly what “democracy” means in Roosevelt’s mouth.

Where the Emphasis Must Be

Under these circumstances, the most important fact is that the masses are in motion. Yet every radical or pseudo-radical seems terribly concerned with the fact that A. Philip Randolph and other leaders are reactionary warmongers, who protest their determination to make the march a patriotic demonstration. In my view this is an absolutely warped, distorted, sectarian attitude. If the Negroes were planning to march to Washington, solely for the purpose of demonstrating patriotism, Roosevelt would come half-way to meet them and fall on Randolph’s neck with tears of joy in his eyes. Conversely, we would denounce the march and tell every Negro to have nothing to do with it. But the last thing these masses of Negroes are thinking of is patriotism. Therefore our MAIN business is to encourage, to assist and to stimulate the Negroes in every way and to make all workers see the necessity for supporting the march to the fullest possible degree.

Every worker who reads our press and hears our speakers, knows where we stand on the war. He has heard it for ten years, he hears it now, he will hear it as long as capitalism lasts. What matters today and until July 1 is that some thousands of Negroes, with the eyes of the nation upon them, are moving to place their legitimate demands before the government. Every ounce of strength should be thrown into encouraging that. The masses are going to learn, and make the socialist revolution, on the basis of their own experience, not on radical denunciations of Randolph and his band of flag-wavers. This march brings the Negroes out of demoralization, impotent rages, bitterness against individual employers and reactionary workers; it brings them face to face with the center of capitalist authority, the capitalist state and its embodiment, the President.

“What Do You Propose to Do?”

Roosevelt has talked and talked and talked, and Eleanor has talked some more. Now the Negroes want to face him with a stern request, “What do you propose to do?” To be all upset about the fact that those at the head and even some of the rank and file “support the President’s foreign policy” is to lose all sense of proportion and to think that the revolution is a matter of thesis-writing and votes at conventions. the revolutionary PARTY must keep its own doctrine clear and tight or it will perish. But the masses move and act in a different way.

“All power to the Soviets.” said Lenin. He said many other things as well, but that was the mass slogan. “All power to the Labor Government” we say where a Labor Party exists. In the same way, “All power to the march on Washington.” And not only to Washington, but a march to every municipality and federal authority in every state and every city. A Negro reading our press or listening to our speakers will learn our war position, our warnings, our view of the only ultimate solution, but today, in this situation, he must above all understand that we are for the march and, Randolph or no Randolph, he must not only be for the march, but must, if necessary, even lose a week’s, work to get into it.

Posted by Michigan Emergency Committee Against War & Injustice at 1:13 PM